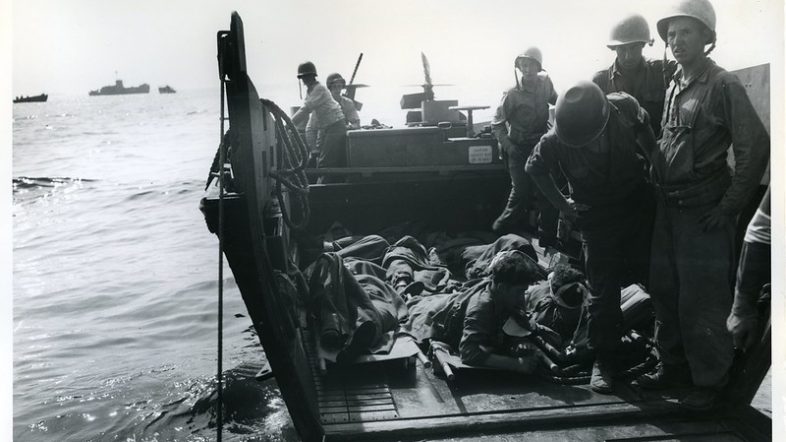 A Higgins landing craft from WWII has surfaced in Lake Mead following receding water levels in recent months. The WWII-era vessel was a sight that not many expected to see; the ship typically sits 185 feet under the water’s surface at Lake Mead.

This Higgins landing craft was used to survey the Colorado River decades ago, and it was eventually sold to the Lake Mead Marina, who opted to sink the vessel. However, the historical artifact has remained at the bottom of Lake Meade ever since and has served as an underwater tourist attraction for scuba divers.

History: These Higgins landing crafts were essential to the allies’ victory on D-Day. One thousand five hundred of these vehicles were deployed in Normandy to aid in the invasion on June 6, 1944.

The small landing crafts were capable of carrying personnel and some small vehicles from larger Navy ships onto land. In addition, the Higgins boat was equipped with a ramp to allow personnel to exit without being completely exposed to enemy fire.

Higgins boats were created by Andrew Jackson Higgins, who had adapted his design for shallow water work boats for the needs of the U.S. Military. President Dwight D. Eisenhower said, “Andrew Higgins is the man who won the war for us.”

What Is Going On At Lake Mead: Water levels have been dropping at Lake Mead for years and very recently hit all-time lows.

These receding water levels have made many previously unseen underwater structures visible to the public. There have also been recent cases of unsightly discoveries at Lake Mead, such as a body in a barrel being discovered at the lake due to these dropping water levels.

What Will Happen As Water Levels Continue to Decrease: The dropping water levels at Lake Mead have been flagged as a disaster in the making.

Lake Mead currently sits 150 feet above the “dead pool” level; if it were to drop to that level, the lake would no longer allow water to flow downstream from the Hoover Dam. This would cripple power output from the dam, which would have catastrophic consequences for people living in California, New Mexico, Arizona, and Nevada.

The lake is still a few years away from hitting this point. But experts still warn that something should be done about the water level of Lake Mead.

What are People Saying: Robert Glennon, an emeritus professor at the University of Arizona, told NBC News, “This is deadly serious stuff.” Glennon pointed out that the decreasing water levels of Lake Mead are a result of Climate Change and increased demand for water across the southwestern U.S.

Social Media Reaction: Some social media users have begun posting photos of Lake Mead today and contrasting them to older pictures of the lake.