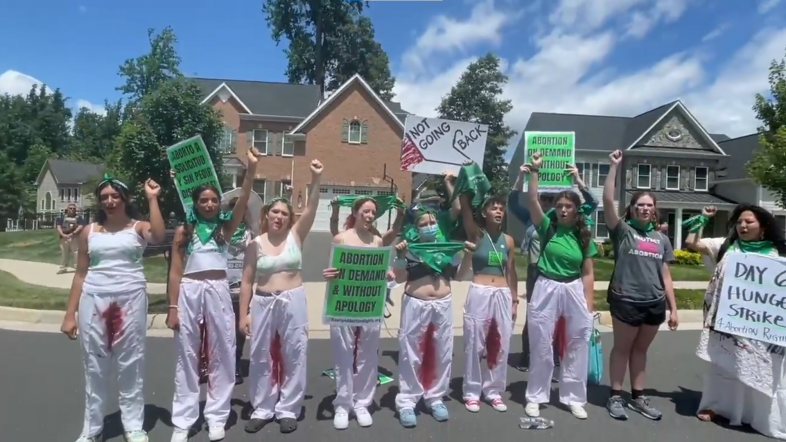 Pro-Abortion activists with the Rise Up 4 Abortion Rights group recently led a march on Supreme Court Justice Amy Coney Barrett’s home this past Saturday. The protesters dawned white clothes with green handprints on their chests and red paint on their pants while carrying what appeared to be baby dolls.

What Happened: These activists posted several videos on social media about their protest, including one where one attendee described why the group was out in front of the Supreme Court Justice’s home.

“We are here at Justice Amy Coney Barrett’s house today with our arms tied, with our mouths covered, holding dolls because this is what Amy’s America looks like,” the activist said.

The Tweet sharing the video quoted one individual as saying, “Children forced to give birth to children! Women will be inferior! ALL OF U WHO ARE PRO CHOICE. Come to DC & stay!”

Another Tweet from the organization read, “We aren’t incubators! Youth procession delivered baby dolls to Amy Coney Barrett. We aren’t protesting to change the minds of women-hating fascists. We’re calling on the pro-choice majority, on YOU, to get in the streets to STOP #SCOTUS from overturning Roe http://RiseUp4AbortionRights.org“

Context: This demonstration occurred just days after President Joe Biden signed a bill to expand security protection for the Supreme Court Justices and their respective families.

This legislation managed to pass the House with a vote of 396-27, with all 27 who voted against the bill being Democrats, and unanimously in the Senate.

Texas Senator John Cornyn (R-TX), alongside Deleware Senator Chris Coons (D-DE), introduced legislation similar to this back in May following a leak from the Supreme Court that suggested the court was going to overturn Roe V. Wade.

Background: The leak was a Supreme Court draft opinion from Justice Samuel Alito. This document suggested that the court was going to overturn Roe V. Wade.

A 26-year-old man was charged with attempting to murder a justice of the United States. The maximum sentence for this is life in federal prison, and an initial appearance in court is expected to be announced soon.