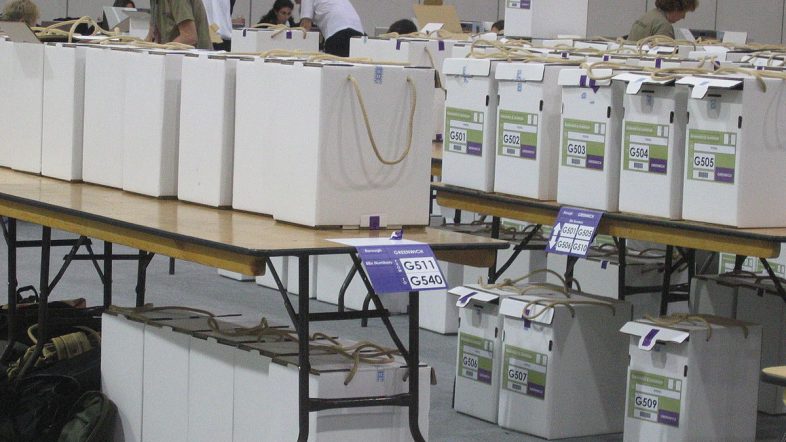 What Happened: Roughly one dozen chief election administrators detailed a growing number of “insider threats” that have attempted or been successful in breaching the security of the electoral process. These comments were made during a series of interviews at the National Association of Secretaries of State’s summer conference.

One Colorado county clerk was indicted for facilitating unauthorized access to voting machines. Similar instances have occurred in Pennsylvania, Michigan, and Ohio.

What Are “Insider Threats?”: The insider threats are individuals within the election system facilitating or committing acts of fraud to help a preferred candidate. For example, some insider threats give access to voting machines to third parties and have been alleged to manipulate ballots.

What Else Are Officials Talking About: Election officials in some states have also called out local officials for refusing to certify election results. For example, in 2020, Otero County refused to certify primary election results, citing claims that the security of voting machines had been breached.

Copycat Attacks: One Election official in New Mexico told Politico that other officials should be wary of copycat methods similar to those we have seen in the past few months.

Maggie Toulouse Oliver, New Mexico’s Secretary of State, said, “It can create a domino effect, because if one county successfully manages to tank their election by not certifying it, we’re gonna see copycats.”

Kentucky Secretary of state Michael Adams told Politico, “I read something in POLITICO about what’s going on in some other state, and then three days later, we get the same thing in our state.”

Some Officials Are Preparing for the Worst: Election officials in states that have not experienced insider threats have announced that they are taking extreme measures to prevent them from happening.

Colorado Secretary of State Jena Griswold told Politico, “We always had various redundancies and protocols in place to minimize against the prospect of an insider threat … But I think how it’s changed is preparing.”

After two separate security breaches in Colorado, Griswold pushed for a new law that would make it a felony to facilitate access to voting machines and other voting equipment from unauthorized parties.

Accidental Breaches of Security: While insider threats have been leading the conversation about election security, there are those sounding the alarm on unintentional security breaches.

Ohio Secretary of State Frank LaRose told Politico, “A hacker can try to enter through your door… You got to constantly remind people, because human nature is ‘Oh, yeah, let I’ll somebody in the building.”