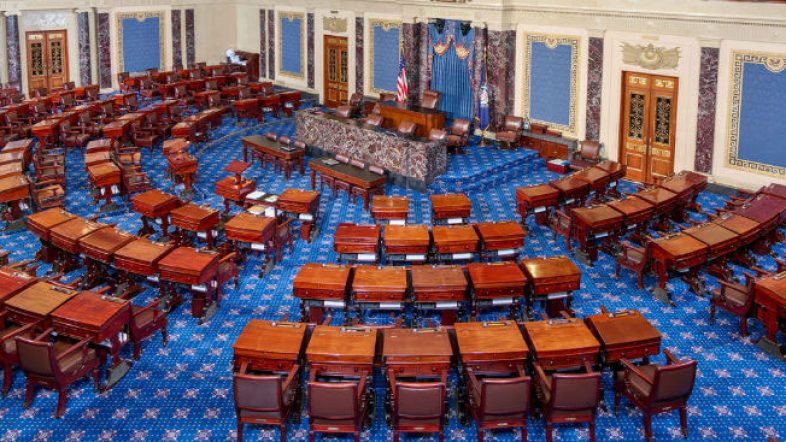 Passage of the $1.7 billion omnibus spending bill stalled on the Senate floor Wednesday night when lawmakers went head-to-head over Title 42.

Hoping to pass the bill Wednesday night, Senate Democrats agreed to hold votes on amendments to the spending package if Republican Senators would allow an earlier vote on the bill. The process stalled when Democrats refused to hold a vote on an amendment proposed by Senator Mike Lee, (R-UT). The amendment seeks to maintain the Title 42 policy that bars immigrants from crossing the U.S./Mexico border during a health crisis.

The delay has forced senators to postpone voting on the omnibus package until the end of the week: a move that can potentially result in a continuing resolution for short-term funding of the government until early next year. A number of senate Republicans would welcome a CR, as it would allow them more control over the content of a government funding package. The Republican-controlled house will start its work in early January.

If the deal blows up, it could prompt lawmakers to quickly pass a short-term spending bill for a few weeks, which is what House Republicans in particular have been pushing for. House GOP lawmakers say they’ll have more leverage to shape a spending bill the way they want next year, when they take control of the House.

Lee, who has been vocal in his opposition to phasing out Title 42 has expressed concern over the size and scope of the proposed omnibus package.

“After getting literally everything they want in this 4,155-page monstrosity, the Democrats won’t give us an up-or-down vote on an amendment to preserve Title 42. Why? Because it will pass, and that terrifies them because they want chaos on the border,” tweeted the Utah senator Wednesday night.

He is also urging his Republican colleagues to stay in Washington until his amendment is passed.

He added: “All Senate Republicans should be ready and willing to return to the Capitol to support Title 42, even on short notice.”

So far, senate Democrats have not agreed to pass Lee’s amendment.