The Beauty of Marriage – Between a Man and a Woman

The Beauty of Marriage – Between a Man and a Woman 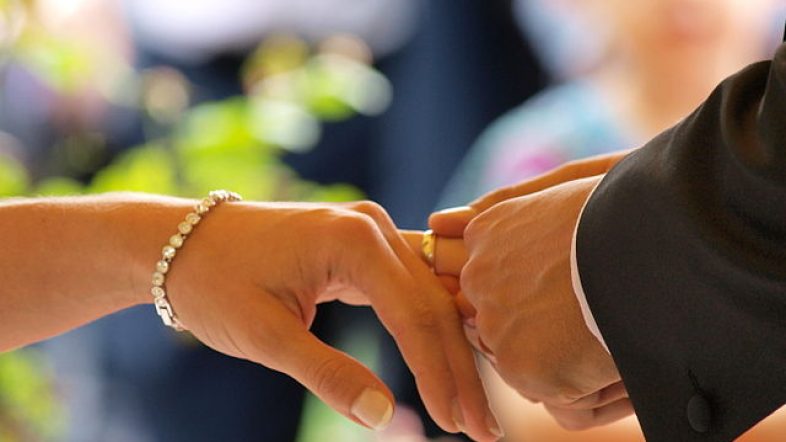 This September, the Senate was supposed to debate H.R. 8404, a bill known as the Respect for Marriage Act. The bill, passed by the House of Representatives, was sponsored by Rep. Jerrold Nadler (D-NY). Its purpose is to repeal a law passed in 1996 called the Defense of Marriage Act. According to proponents of H.R. 8404, the Defense of Marriage Act discriminates against people who want to enter into same-sex marriages. With this excuse on hand, the Democrats in Congress – and some Republicans – want to pass a law that would authorize the attorney general of the United States to punish any American Citizen who understands that marriage is a sacred institution between one man and one woman. Soon, the Senate will seriously consider making such action legal at a federal level.

Politicians, activists, private citizens, all are working hard, these days, to force everyone to validate the idea that marriage can exist between two men or two women. There are some persistently problematic points against this idea, though.

The first problem is the question of love. Most of us have seen signs in front of our neighbors’ homes with messages such as, ‘Love is love.’ Yes. Love is love. Marriage is love, but love is outbound, not inverted. To love is to be for the other. Even though men and women often fall short of the outward character of their union, the very nature of their marriage makes love a possibility. A man’s essence calls him to take care of his wife, to protect her, even at the expense of his own life. A woman’s nature impels her to take care of her husband by supporting him, nurturing him. At the center of marriage is the constant possibility of new life. What can bring a person more out of his or herself than bringing a child into life?

Let us not mince words. Only man and woman can create life. Only the union between a male and a female person can form a new person. Raising that new person is also the province of a man and a woman. Every child needs a father and a mother. Respectively, the parents’ lives are fulfilled by the raising of their children. This is the second problem for proponents of ‘gay marriage.’ Two men can adopt a child. Two women can turn to in vitro fertilization in order to get pregnant and have a baby. But are they raising the child according to everything he or she needs? Can two men provide a little boy or a little girl with the balanced life he or she requires?

The third problem is the most basic one: at the heart of marriage between a man and a woman is the truth. Marriage between a man and a woman is a reflection of the truth. It cooperates with reality. It is in harmony with nature. What about so called ‘gay marriage’? I suggest that the ‘union’ between two men or two women is an artificial concept at the bottom of which there is a need to rebel and to ‘have all eyes on me.’ Gay marriage is not an outward thing. It is inward and self-absorbed. In its essence, it is about identity. It is not about loving the other.

Today, married men and women must become a visible sign of the truth. Given the social environment of our present time, families – and by that I mean father, mother, and children – need to be who they are and be so with pride – true pride. The world is thirsty for their witness to life. Further, any American citizen who values the right to free speech and understands that every person has the right to believe whatever he or she wants to believe, without fear of government repression, needs to contact his or her senator and tell him or her that H.R. 8404 is unacceptable.