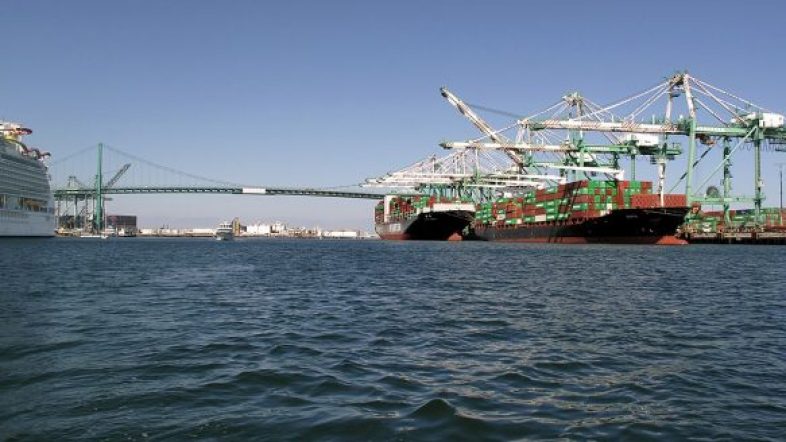 On the right, container ship Zebra is being unloaded (truck with white cab is waiting for container to be lowered), and container ship Evergreen Ever Logic is being loaded. Behind them is the Vincent Thomas Bridge, and behind the bridge are petrochemical facilities. A day excursion boat is coming toward the camera. To the left is a docked passenger cruise ship.

The backlog of ships in Southern California’s ports has moved further out to sea.

Context: Los Angeles is the nation’s largest port and the backlog of ships waiting to offload is getting worse.

Around 30 vessels are visible but more than 60 remain in the waters further from shore.

Why are they doing this?: It is part of a voluntary program to protect ships from sweeping winter winds and rough seas.

Or it could be to save face, but the official statement is that it is for the protection of the ships.

However, there is a reason for this. Ships used to have to cross a line 20 nautical miles from ports to secure their place in line at a container terminal.

Now, the ships get on the list once they leave their last port of call.

When will it get better? The Biden has attempted to solve the backlog, but lack of workers, trucking equipment, and increased volume has bottlenecked ports.

No near-term solution seems to be on the table.

What they are saying?: