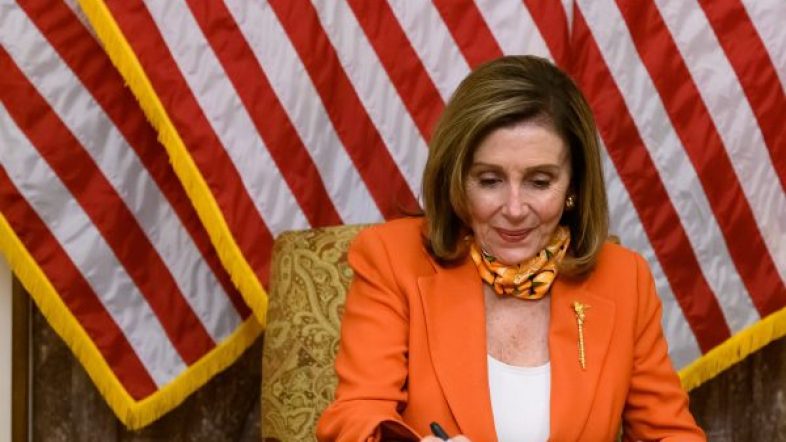 House Speaker Nancy Pelosi’s husband, who has a history of suspiciously timed stock moves, has given critics one more to scrutinize. Just ahead of a vote next week to deliver billions in subsidies to boost chip manufacturing, Paul Pelosi bought 20,000 shares of Nvidia.

Pelosi purchased the shares for roughly $5 million dollars less than one month ago, according to the Daily Caller. Nvidia is one of the world’s largest semiconductor production companies.

Next week, senators will vote on a bipartisan bill that sets aside $52 billion to boost domestic semiconductor manufacturing and provides additional tax credits, Reuters reported.

“It certainly raises the specter that Paul Pelosi could have access to some insider legislative information,” Craig Holman, a lobbyist for the left-wing Public Citizen, told the Daily Caller. “This is the reason why there is a stock trading app that exclusively monitors Paul’s trading activity and then its followers do likewise.”

Nancy Pelosi touted the bill when the House passed it at the beginning of the year, and would have been aware of its upcoming vote in the Senate.

Today, the House takes action to transport our nation into the future, with the #AmericaCOMPETES Act: bold, results-oriented legislation that will strengthen America’s national and economic security and the financial security of families, and advance our leadership in the world. pic.twitter.com/rGQHSadED1

“Obviously Speaker Pelosi would be aware of the timing of this legislation over in the Senate,” said Representative Ralph Norman (R-SC). “On the heels of that vote, for anyone in her orbit to purchase seven-figures worth of stock of an U.S.-based chip manufacturer just reeks of impropriety.”