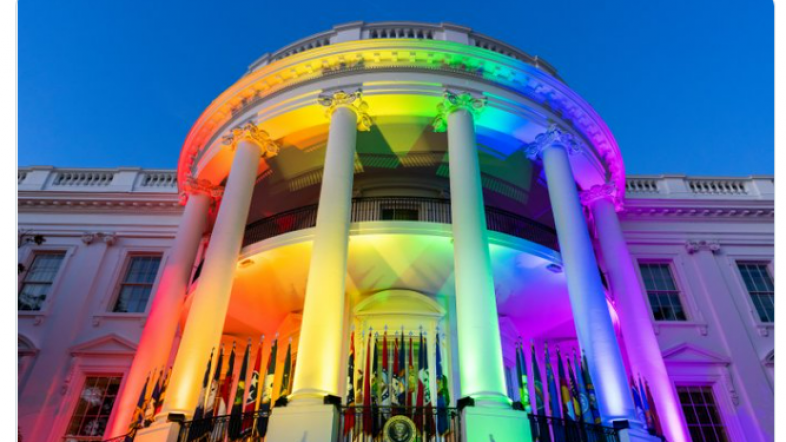 Taking a page out of Obama’s playbook, Biden has made a mockery of an American institution, the U.S. White House by smearing it with the colors akin to the LGBTQ+ community. Marriage is between one man and one woman. However, Biden supports smearing marriage like he smeared the White House.

The White House was glowing the colors of the rainbow Tuesday night, hours after President Biden signed the Respect for Marriage Act into law.

Hours after the event, the White House shared a photo glowing in rainbow colors. 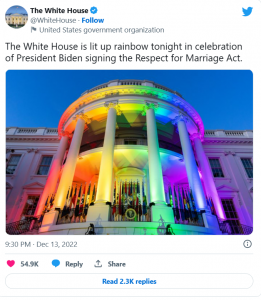 The red, orange, yellow, green, blue, indigo, and violet colors are often used as a symbol by the LGBTQA+ community to represent equality. The rainbow was glowing on the White House during the daytime ceremony.

During the ceremony, Biden denounced hate “in all its forms” and celebrated the new law.

“This law and the love it defends strike a blow against hate in all its forms,” Biden said during the ceremony on the South Lawn of the White House Tuesday afternoon. “And that’s why this law matters to every single American.”

He added: “Racism, antisemitism, homophobia, transphobia, they’re all connected. But the antidote to hate is love.”

The signing ceremony comes after lawmakers from both sides of the proverbial aisle worked to legislatively protect marriage after the U.S. Supreme Court decided to overturn Roe v. Wade. Pelosi and Schumer thanked those in attendance.

Pelosi said “inside maneuvering only takes us so far” but went on to celebrate the new law and thanked activists for “your impatience, your persistence and your patriotism.”

Schumer added: “Thanks to the millions out there who spent years pushing for change, and thanks to the dogged work of my colleagues, my grandchild will get to live in a world that respects and honors their mothers’ marriage.”