Protests in Iran: The Silence of the 'Feminists' and 'Progressives'

Protests in Iran: The Silence of the ‘Feminists’ and ‘Progressives’ 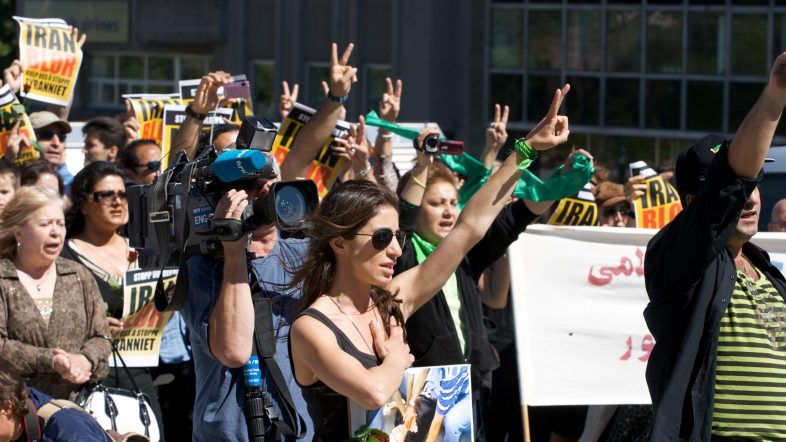 Where are the American feminists and “progressives” when we need them? You know, the men-versus-women, pro-abortion types who say things like the reversal of Roe v. Wade represents “men wanting to tell women what to do with their bodies”?

On Sept. 16, Mahsa Amini, a 22-year-old woman living in Iran, died in a hospital three days after being arrested in Tehran by the state’s morality police known as “Guidance Patrols.” Her “crime”? She showed too much hair underneath her hijab or headscarf.

The New York Times reported: “The police did not offer an explanation for why Ms. Amini was detained, other than that it involved the hijab rule. Her mother said in an interview with Iranian news media that her daughter was observing the rules and wearing a long, loose robe. She said Ms. Amini was arrested as she exited the subway with her brother, and that his pleas that they were visitors to the city were ignored.”

According to the BBC: “Eyewitnesses said Mahsa Amini was beaten while inside a police van when she was picked up in Tehran on Tuesday. Police have denied the allegations, saying Ms Amini had ‘suddenly suffered a heart problem.’ ” However, at least one Iranian judicial official, according to state media, said the woman suffered “multiple fractures … in the pelvis, head, upper and lower limbs, arms and legs, which indicate that the person was thrown from a height.”

In protest, women in Iran are cutting their hair, with some taking to social media and burning their hijabs. Two weeks ago, CNN reported: “Protests have swept through more than 40 Iranian cities, including the capital Tehran. Iranian security forces have been cracking down on protesters, with hundreds arrested and at least 41 killed, according to state media. Some human rights organizations say the death toll is as high as 76.”

As for Iran, Human Right Watch states: “Since March 21, 2022, at the beginning of Iranian New Year, Human Rights Activists News Agency (HRANA) has documented 306 executions, 130 of them for drug-related charges and 151 of them based on the Islamic principle of qisas, or ‘retribution in kind’ punishments. Between May 21 and June 21 alone, the group documented 99 executions.”

Rep. Alexandria Ocasio- Cortez, D-N.Y., tweeted: “Solidarity with the courageous women and allies in Iran protesting for their freedom. Mahsa Amini was senselessly murdered by the same patriarchal and autocratic forces repressing women the world over. The right to choose belongs to us all, from hijabs to reproductive care.” And Rep. Ilhan Omar, D-Minn., put out a statement: “Those responsible for her death should be held accountable and the world should be united in fighting against the policing of what women wear and how they show up in society. Banning the hijab is not much different than forcing one on women. Religious beliefs are personal and should never be imposed on anyone. (May God have mercy upon her soul).”

Rashida Tlaib, D-Mich., who once said about President Donald Trump, “We’re going to impeach this …,” and after the reversal of Roe v. Wade, tweeted, “Reproductive rights are human rights that remain under threat across the country,” tweeted mildly, “I stand in solidarity with the Iran protests as they fight for a woman’s right to bodily autonomy and against police brutality in the wake of the horrifying murder of Mahsa Amini.”

As for the rest of The Squad, silence.

No call by American feminists and progressives for the collapse of the totalitarian government of Iran. No wholesale condemnation of this police state’s mandate that women wear the hijab and face imprisonment for failing to do so, or for failing to wear it “correctly.”

No plea that the Biden administration, at the very least, publicly support the Iranian protesters demonstrating the same kind of courage as have the Ukrainians following the Russian invasion.

Talk about “men telling women what to do with their bodies”! All the elements to make this an Iranian George Floyd moment are present.

But the relative silence by The Squad has been deafening.