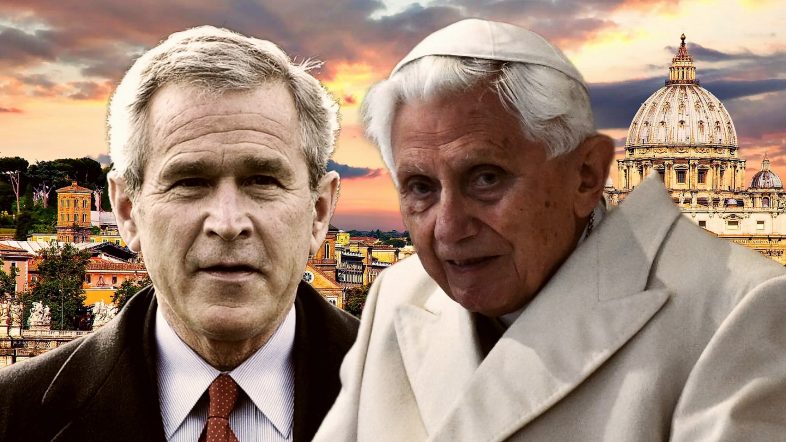 Pope Benedict XVI died on Saturday at the age of 95. He was the first pontiff in 600 years to resign from the job. Pope Francis will celebrate his funeral Mass in St. Peter’s Square on Thursday, which will mark the first time a current pope will celebrate the funeral of a former one.

Benedict was born Joseph Alois Ratzinger in 1927 in Marktl, Germany. His father worked as a policeman and his mother as a hotel cook. When Ratzinger was six, the Nazis came to power and his parents, who were devout Catholics, despised them. Ratzinger was in seminary in 1941 when he was drafted into the German military during World War II, but he deserted in 1945 and was briefly held prisoner by American forces.

After the war, Ratzinger returned to the seminary and was ordained a priest in 1951. As a clergyman, he was renowned for his academic career, earning a doctorate in theology at the University of Munich, and going on to teach theology at universities across Germany. He also wrote a number of important theological works, including Introduction to Christianity and Dogma and Revelation.

Student protests and denunciations of Christianity from far left groups at German universities reminded Ratzinger of Nazi tactics which led him to adopt a more conservative theological perspective.

In March 1977, Ratzinger was appointed archbishop of Munich and Freising by Paul VI. He developed a friendship with Pope John Paul II who shared a history of living under a totalitarian regime. The two also had very similar views on the Church and for more than two decades, Ratzinger was the pope’s closest adviser.

Ratzinger was elected Pope in 2005 largely due to his devotion to his predecessors teachings and ideals. Taking the name Benedict XVI, he would spend his first years as Pope focusing on improving relations between the Roman Catholic and Eastern Orthodox churches. He issued new guidelines allowing greater use of the Latin mass and restored the traditional papal election process which requires a two-thirds majority for cardinals.

Relationship with the United States

In 2008, Benedict made his first visit to the United States where he met with George W. Bush at the White House and spoke out against the clerical sexual abuse scandal at the U.N. in New York. At his meeting with Bush, Benedict gave an unprecedented speech on the White House lawn to which the president responded, “Thank you, Your Holiness. Awesome speech.”

In 2009, president Obama met with Benedict at the Vatican where the two discussed issues such as combating poverty worldwide, nuclear arms control and abortion. Obama said he was “very touched by the visit” although although some of his opinions differ from those of the pope.

At the time, Deputy National Security Adviser Denis McDonough said, “The president, as he said in Notre Dame, has thought long and hard about these issues and he has his views on it. … At the end of the day, it may just be that there’s issues that they can’t come to agreement on, but I think he believes that you can… disagree without being disagreeable.”